Is Now the Time to Take Heavy Equipment Operator Training?

If you’re looking for a rewarding -and lucrative- job which could take you just about anywhere on the North American continent you want to go, it could be a fine time to think about heavy equipment operator training!

Heavy machinery isn’t a career move that a lot of people would think of, but fundamentally, it’s open to almost anyone who’s over-age and responsible.  It’s just as viable for someone coming out of high school as for someone who’s switching careers from a dead-end office cubicle path.  As long as you complete the training and get your certification, it’s your work-ethic and skills which will carry you forward – not your age, sex, race, or other demographic items.

Since this is an unusual field, let’s look at some questions about heavy equipment operator training we often hear here at 5th Wheel Training Institute.

Are there ever!  Just drive down the Highway, and look at all the construction.  Every single one of those sites is guaranteed to have at least one heavy machine operator, and very likely more than one.  Furthermore, local governments across both Canada and the US are investing heavily in infrastructure – both to create jobs and to improve quality-of-life.  Even if the private sector dips from time to time, there’s plenty of work via government contracting as well.

Current numbers show that the field is split about 50/50 between people who work seasonally and those who work year-round.  And that sounds about right to us, since there is undeniably an “off season” during the colder months.  There’s still construction and other need for heavy equipment operation, just not so much.

However, keep in mind that it’s common for equipment operators to get related jobs during the offseason.  For example, running snowplows.  Once you have a heavy machine licence, it’s not hard to get certifications for other similar large working vehicles.

YES!  Desperately so, in fact.  Right now, the median age for a heavy equipment operator in Canada is 43, and with an average retirement age of 65.  It’s the very definition of an aging workforce and, right now, there aren’t enough young people moving into the field to keep it fully populated in most areas of the province.  As things stand, the gulf between available jobs and available workers is only going to grow until more younger workers start moving into heavy machinery.

In the meantime, that make it an excellent opportunity for a younger worker to learn a trade which is only going to be in increasing demand in years to come.

You have plenty, depending on how many different certifications you want.  Backhoes, bulldozers, graders, dump trucks, excavators, forklifts, and more!  If you like “playing” with equipment, it’s like having a great toybox. 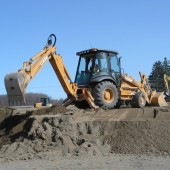